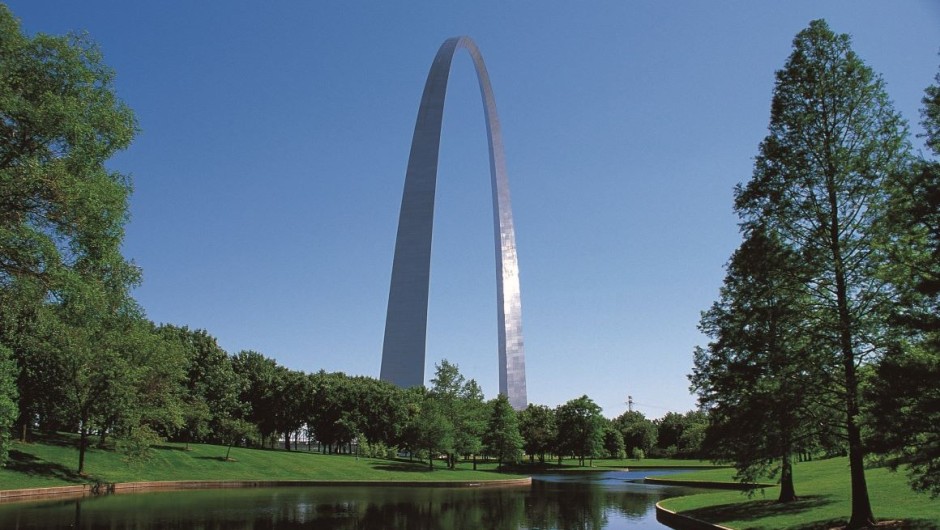 It has been called brilliant, inspirational, breathtaking, a true architectural marvel.  Those who have visited the Gateway Arch rarely forget their first glimpse of the shimmering stainless steel icon.  It soars 630 feet above the St. Louis riverfront, standing as a lasting memorial to Thomas Jefferson’s vision of exploring the American West. But who was the creative genius behind the design of the Arch?

When St. Louis officials decided in 1947 to erect a monument to President Jefferson on the downtown riverfront, they invited architects from around the world to submit designs.  A little-known Finnish architect named Eero Saarinen beat out more prominent designers with his plans for a majestic arch rising from the riverbanks.  The competition judges appreciated the symbolism of an arch as a reference to St. Louis’ historic role as a “gateway to the west.”  As Saarinen said at the time, “The major concern… was to create a monument which would have lasting significance and would be a landmark of our time… Neither an obelisk nor a rectangular box nor a dome seemed right on this site or for this purpose. But here, at the edge of the Mississippi River, a great arch did seem right.”

Beyond its architectural beauty, the Arch is also an engineering marvel.  Each leg consists of double-walled steel equilateral triangles which are stacked one on top of the other and welded together. The complex engineering design and construction is completely hidden from view; all that can be seen from the outside is its sparkling, stainless steel outer skin.

Nor did Saarinen intend for visitors just to look at the Arch – he wanted them to go inside it and travel to the top.  So he designed the structure’s two legs to be hollow, allowing enough room for a specially designed tram to transport guests up and down, itself a daunting engineering challenge.

Saarinen went on to design other prominent American buildings, including the TWA airport terminal in New York, Dulles International Airport near Washington, D.C., as well as numerous churches, university buildings, and corporate headquarters.  He was also an influential furniture designer, responsible for the famous Tulip Chair and other well-known mid-century pieces.

Saarinen would be turning 112 years old on August 20.  What better way to commemorate his birthday than with a trip to the Gateway Arch, where you can admire his architectural wonder and learn more about the building of the monument in the Arch Museum.  Or you might want to purchase one of the many Saarinen-related products we sell at The Arch Store, like this handsome tote bag.

One thought on ““A great arch did seem right.””