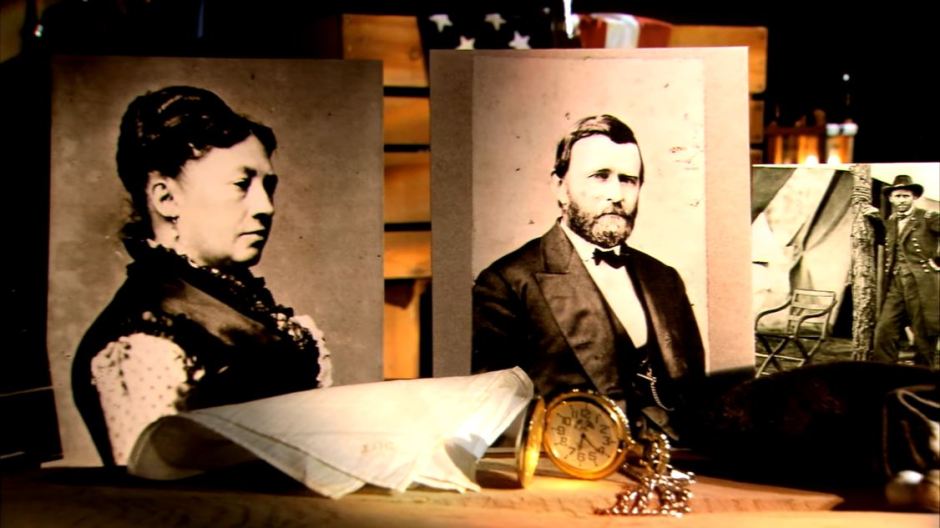 Julia Dent grew up in the early 19th century on a plantation near St. Louis named White Haven.  The fifth of seven children, she was an outgoing, active girl who fished, rode horses, and played in the woods with the plantation’s enslaved children.  Julia once told her school friends she would someday wed “a gallant, brave, dashing soldier.” Little did she know that she would indeed marry a soldier, and that he would become commander of the armed forces and later the 18th president of the United States.

You can learn more about the long and eventful life of Julia Dent Grant later this week.

Some would say Julia Dent and Ulysses Grant were an unlikely pair.  She was spirited and gregarious; he was shy.  She was raised in a slave-owning family; his family was opposed to slavery.  In fact, Grant’s choice to marry into the Dent family worsened tensions with his father, and none of the Grants attended Ulysses and Julia’s wedding in 1848.

Against the odds, the Grants’ marriage lasted for 37 years, and through all their many hardships and accomplishments, their close bond never wavered.  The couple endured numerous separations as Grant pursued his military career.  And though Julia was sometimes able to accompany her husband to distant Army postings, she returned home to White Haven for the birth of their four children.  During the Civil War, she served as the financial manager and agent for White Haven in her husband’s absence, leasing sections of the farm, collecting rent, and consolidating land titles.

As the nation’s First Lady, Julia was an active participant in presidential matters and reveled in her eight-year role as hostess to the nation.  She entertained lavishly and welcomed dignitaries from around the world to the White House.  At the end of Ulysses’ second term, the couple embarked on a two-year worldwide tour that further burnished her reputation as a valuable partner to the former president.

Her later years were difficult, however.  Grant lost most of their money in a bogus financial deal, and the couple was nearly destitute.  By the time he signed a lucrative contract to write his now-famous memoirs, Grant was dying of throat cancer.  Julia lived as a widow for 17 years until she died at age 76 in 1902.

Pam served as park ranger, education director and historian at the park for many years and is now Program Manager for Museum Services and Interpretation at Gateway Arch National Park. She is the author of numerous essays, articles, and publications. Her biography of Julia Dent Grant is scheduled for publication by Southern Illinois University. Pam’s talk will present highlights from her research on Julia and her family.

Just in time for the upcoming wedding anniversary of Ulysses and Julia Grant, the National Park Service has created a new online exhibit exploring the life and legacy of the nation’s 18th president.  The expansive exhibit amasses artifacts, documents, and photographs from numerous Park Service sites, including Ulysses S. Grant National Historic Site.

As one might expect from such a multi-faceted figure as Ulysses Grant, his life encompasses many aspects, including his early upbringing and family life as well as his military career and presidency.  And the fascinating new exhibit covers them all.

There are more than 20 national sites with connections to Grant, many of them housing collections that include artifacts, portraits, and documents related to the president or his family members.  But thanks to this new virtual exhibit, many of these items can now be viewed in one accessible location.  They shed light on little-known facets of his life, helping us gain greater insights into the famous man.

Although Grant is celebrated for his military and political achievements, his artistic side is less well known.  The exhibit features sample of some of his watercolor paintings. When he was a West Point cadet, he enrolled in several drawing classes and developed this hobby over the years.  Sadly only eight of his paintings have survived to the present day.

Then there are the charming vestiges of the Grants’ everyday life, like Julia’s ivory sewing kit, Ulysses’ cigar holder, the couple’s ivory and silver coffee service, and even the leather boots worn by Julia’s sister Emma.

The exhibit explores Grant’s military career from his early days at West Point to his role as commander of the entire Union Army during the Civil War.  The surrender of Robert E. Lee at Appomattox in 1865 is highlighted with a color image of a Currier & Ives print of the two generals signing the surrender documents, a photo of the chairs and table used during the signing ceremony, and a poignant letter outlining the terms of surrender.

Grant’s experience with the institution of slavery is a recurrent theme in the exhibit.  From an early age, he was taught that slavery was wrong and that his Southern relatives “had depended too much on slave labor to be trained in self-reliance.”  When Grant married into the slaveholding Dent family, it worsened tensions with his father (none of the Grants attended Ulysses and Julia’s wedding).

Yet when the couple occupied White Haven in the 1850s, they lived and worked alongside dozens of enslaved African Americans, most of whom were owned by Grant’s father-in-law (though Grant himself owned an enslaved man named William Jones, whom he later freed).  This experience strengthened Grant’s hatred of slavery and commitment to abolish the institution, and set the stage for him to become one of the great civil rights presidents in American history.

The new Grant exhibit is just the latest virtual exhibit created by the National Park Service Museum Management Program, whose aim is to make the broad range of NPS collections widely available to online users. You can see numerous other offerings at the program’s website.

In honor of Ulysses and Julia’s 174th wedding anniversary on August 22nd, you may want to brush up on the life of Julia Dent Grant.  She had a long and event-filled life as the wife of a Civil War general and U.S. president.  Also check out her personal memoirs, which are available from JNPA’s online store, or at the gift shop at Ulysses S. Grant National Historic Site. 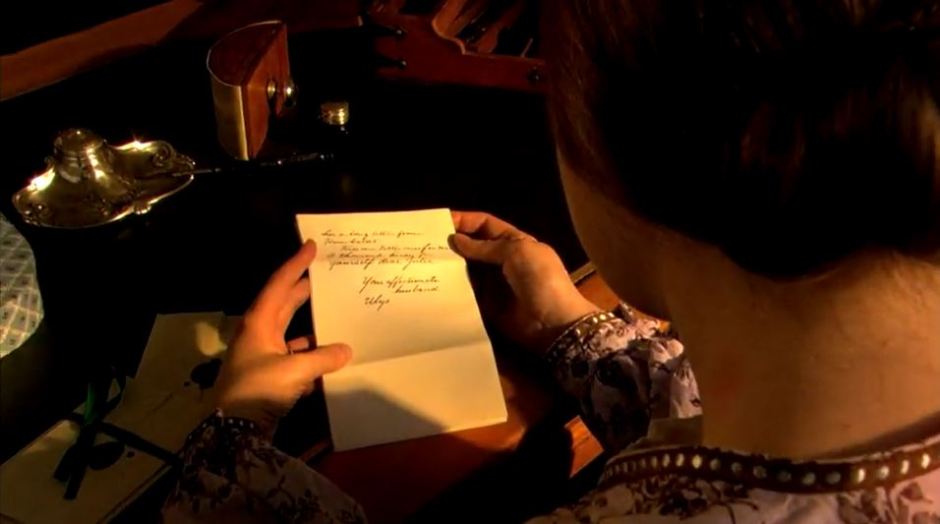 What do you know about Ulysses S. Grant?  Victorious commander of the Union troops in the U.S. Civil War:  Check.  Eighteenth President of the United States:  Yep.  Devoted lover:  Huh??

President Grant and his wife Julia Dent Grant sustained a long love affair throughout their lives. What better love story to share in time for Valentine’s Day?

Ulysses and Julia’s romance began at White Haven, the Missouri plantation owned by Julia’s parents.  In 1843, while stationed at a nearby Army barracks, the young Lieutenant Grant visited the farm where his West Point roommate had grown up.  He was immediately charmed by Julia and often made the 12-mile ride to White Haven to visit her several times a week.

Unfortunately for the young couple, their courtship was marked by long periods of separation while Grant was on assignment for the Army.  So they turned to letter writing as their sole method of declaring their love.  Although sadly no correspondence from Julia to Grant survives to this day, we are lucky to have numerous letters that Grant sent to his beloved, and his devotion to her is obvious.

When Grant was stationed in Louisiana and Texas in preparation for the coming war with Mexico, he wrote Julia in 1844 “of the depth and sincerity of my love for you.”  Writing from Texas the following year, Grant told her “for my own part I would sacrifice everything Earthly to make my Dear Julia my own forever.”

Even during the height of battle, his feelings for her were as strong as ever: “…in the midst of grape and musket shots, my Dearest Julia and my love for her are ever in my mind.”  And in that same letter, Grant assures her “I am getting very tired of this war, and particularly impatient of being separated from one I love so much, but I think before I see another birth day I shall see Julia, and if she says so, be able to call her my own Dear for ever.” Grant’s wish eventually came true.  The couple was married at White Haven in 1848.

Though Julia was able to travel with Ulysses to some of his Army postings, they still remained apart for much of their early marriage.  It is thought that these ongoing separations was one reason Captain Ulysses Grant resigned his commission from the Army in 1854 and returned to White Haven to be with his wife and young children.

To learn more about the love story of Julia and Ulysses, watch A Thousand Kisses, the short video about their early life that JNPA helped produce for the National Park Service.

You can also read many of Grant’s letters to his wife in My Dearest Julia, available in our online store or at our bookstore at Ulysses S. Grant National Historic Site.